I’ve owned the same watch for two decades or so. It’s a Timex Expedition that I paid about $25 for. I’ve paid far more than that to replace batteries over the years. But recently I decided to get a new watch, so I popped into the T-Mobile store to get the Samsung Galaxy Watch.

The style is nice. The 42mm bidy fits my wrists well. While the strap won’t win any design awards, it’s unobtrusive. Of course, the face can be whatever you want. I have the “Analog Utility” face, but in fancier situations, I might set it to something a little more elegant. Or not.

Setting up the watch was simple. I like that I can decide which apps will notify on the Watch. The Galaxy Wearable app on my phone made it simple to apply updates and install new apps to the Watch. Of course, the app selection for the Tizen operating system is pretty limited. Samsung Health and replies to incoming texts and Facebook Messenger messages are about the limit of my usage so far.

Composing those replies has been a trip. The default input method is to write the letters with a finger. That generally works pretty well, but the character set is limited. Typing on the T9 option takes some getting used to, since it isn’t the T9 you remember from your featurephone days. Speech-to-text is…underwhelming. It’s clear that Bixby is not in the same league as Google Assistant.

The battery life is pretty good. I’ve been wearing my Watch all night and charging it during the day when I’m at my desk. Even over the weekend, it doesn’t take long on the wireless charger to get enough juice. I could probably get close to two days without charging. Longer would be nice, but this is good enough for me.

I have the built-in SIM, although I haven’t used the Watch away from the phone yet. I can’t see myself doing that too often. But using it for payment instead of pulling out my phone is slightly more convenient. Samsung Pay makes it easy to quickly select which card I want to use. Still, I’m more likely to have already pulled out my wallet by the time I realize that using Samsung Pay is an option.

What’s been most interesting to me is how the Watch has changed my behavior. I’ve noticed I have my phone out less now because I can get notifications on my wrist. From there I can decide whether to pull out my phone or just wait a bit. As a parent who sometimes gets too distracted by his phone, I appreciate this. I also like that it can count my steps without having to remember to put my phone back in my pocket. Having sleep data and heart rate data is interesting, although I haven’t done much with it. I see that data as something to look at retrospectively.

In all, I’m pretty happy with the Galaxy Watch. It won’t last as long as my Timex, but if I get a few solid years out of it, I’ll probably buy a new one.

Despite the fact that approximately eleventy billion keyboard applications exist in Google Play, I’ve always been fairly content with the default keyboard that Samsung puts on the Galaxy S4. I write tweets — and occasionally blog posts — on my phone, but otherwise I don’t do much in the way of content creation. I certainly avoid doing anything intense if it can at all be avoided. I have SSHed into servers to bounce daemons or otherwise fix glitches before, but I certainly don’t like to.

Last weekend, T-Mobile pushed an update from Samsung that slightly changed the keyboard layout. The comma key that used to be on the bottom was no longer there. Now I can’t say with 100% certainty that there used to be a comma key, but muscle memory is a powerful thing and in the past week, every time I tried to type a comma, I hit the voice typing button instead. I can’t find any way to restore the old layout (thanks, Samsung!), so I’m forced to either adjust to it or find a keyboard that I like better.

I’ve never really given on-screen keyboards much thought. In the past, week, though I’ve started actively thinking about what I want from a phone keyboard:

That’s basically it. I’m not a complicated person. So over the last few days, I’ve tried out a few different keyboards to see which one I like the best. 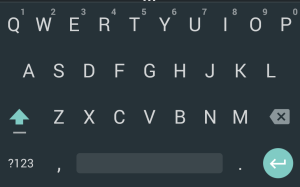 This is the default keyboard on stock Android. I’ve used it some on my crappy, no-name tablet and haven’t minded it (the terribleness of the hardware makes it hard to have much of an opinion on the keyboard). The comma key is a big bonus, and the voice typing key is in the predictive text row (not pictured), which helps keep it out of the way.

The numbers not being their own keys is a little bit of a hassle, but for the most part it doesn’t really matter. Unobviously, the emoji are available by a long press of the enter key. The emoji keyboard scrolls horizontally instead of vertically, but that’s no bother. My main disappointment is the need to use a secondary keyboard to get special characters instead of a long press. 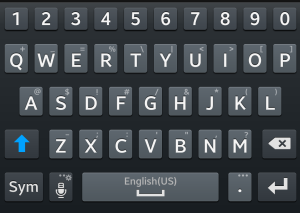 I had to give the incumbent a chance. It mostly covers all of my requirements, but the lack of a comma key really cramps my style. It’s available as an alternate on the period key, so I could probably get used to it with time. I particularly like having many special characters available via long press. 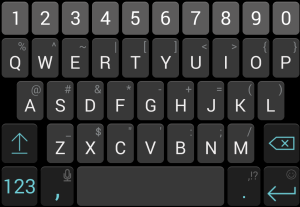 SwiftKey has a layout pretty similar to Samsung Keyboard (too similar, sometimes, as the special keys aren’t all in the same place). It’s very configurable; the ability to specify the length of a long press is particularly excellent. Emoji and special characters are easy to get to, the never-used voice button is hidden behind a long press, and it has an alternate mode for numeric typing. 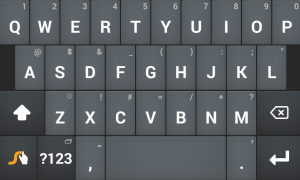 Swype came pre-installed on the phone. It has a neat feature in that you can shrink it and put it on the left or right side, which is probably handy for people with short thumbs (or bigger phones). The keyboard can also be split so that there’s a gap in the middle to help with two-thumbed typing on larger devices. It has an emoticon secondary menu, but I couldn’t seem to find a way to get emoji. That’s a big strike for me, though people who don’t use emoji will probably find this to be a suitable keyboard.

For now, SwiftKey looks like the winner. Google Keyboard is a close second, but the lack of long-press-for-special-characters hurts it. SwiftKey seems to have everything I want out of a keyboard. It still feels a little weird, but once my muscle memory adjusts to the slightly different layout, I think I’ll be in good shape. If you have a favorite keyboard, I’d love to hear about it in the comments.