What a year, huh? We made it, though. 2018 began this morning and so far it’s off to a cold start here in Indiana. I liked the 2016 year in review that I wrote, so I thought I’d make it a annual tradition. Let’s look back and see how things went.

I made a public resolution for 2017, which is not something I normally do. I resolved to read articles before sharing them. That seems like a pretty low bar to clear, but let’s be honest with ourselves: it’s really easy to share things that sound good without reading them. I can’t swear that I fully kept this resolution, but I think I did pretty well with it. If nothing else, there were a few articles that seemed good but didn’t stand up to a skeptical reading. I’ll keep doing this in 2018 and hope that it catches on. We’d all be better off.

I also set a goal of writing 150 articles in 2017 (not counting anything I wrote for work). I fell short of that mark, but I still wrote more than I did in 2016. I finished the year with 122 articles compared to the 101 I wrote last year. The quality and length of the content varied. Some of them were basically “here’s a list of links from stuff I wrote last month.” Others were thousand-plus word articles on topics related to high performance computing. I’m going to aim for 120 articles in 2018, with the hope of keeping a steadier pace. 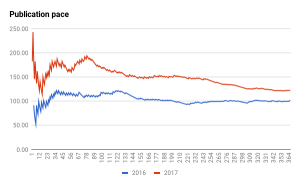 My article publication pace for 2016 and 2017. Note the flurry of activity early in 2017 when the pace flirted with 200 articles, followed by the long slide to 122 in the second half of the year.

I started a newsletter this year. I blather on for a paragraph or two and then I share links to things I liked on the Internet that week. People who scroll to the bottom also see links to articles I curated and wrote. I consider it a success because 1. I’ve consistently published every week for several months and 2. more than zero people read it every month. The road to being a Thought Leader™ is long.

This blog had what I would call a mixed year. I published 87 posts compared to 2016’s 78, but views were down about 30%. The number of visitors only fell about 20%. It’s a good thing I’m not writing this to become famous or make money. Nonetheless, I got about 3% of my views from Reddit and Hacker News, so I’m not entirely ignored. I still don’t do anything to promote my blog beyond my social media accounts and my newsletter. Any uptick in traffic is because people felt something I wrote was worth sharing, not because I’m a marketing genius.

I published that CUPS post in 2010 and it has consistently been my most-visited article. It is trending downward, though. It averaged 5 views a day in 2015, 4 in 2016, and 2 this year. This may be because Google’s algorithm de-weights posts as they age (it probably does), but I’d also like to think it has something to do with CUPS being more reliable than ever before.​

Here are the top 10 Blog Fiasco articles that I published in 2017.

On a personal note

Last year, I made vague allusions to some personal ups and downs but said I thought things were trending upward. I’d say that forecast verified. Despite what’s gone on in the outside world, things here have improved. And you should see the new deck we had built! As you may have noticed in the top 10 lists above, I got a new employer this year. It got off to a pretty rough start, but things have improved.

I’m looking forward to 2018. I have a few projects that I hope to make happen. As much as things have changed in the last year, it feels like I’m still on the cusp of something big. Or not!

If nothing else, I’m proud of myself for continuing to do this after so many years. I don’t think what I’ve written here is particularly wonderful, but I’ve published over 650 posts on this blog in the last decade. That’s something.