I’ve always wanted a weather station in my yard. Not one of those cheap “here’s the outdoor temperature” deals, but something I could really play around with. I finally decided I could treat myself a few months ago and I bought myself a Davis Vantage Vue. 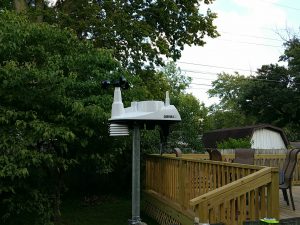 My Vantage Vue weather station mounted on a pole in my yard.

The Vantage Vue isn’t the top of the Davis line. To be honest, I’d have rather gone for a Vantage Pro, which has more sensors. But it’s also more expensive and I don’t have anywhere in my yard that’s a good site for a weather station. And it turns out that siting was the hard part of the whole setup.

The initial assembly and configuration was easy. The instructions were very well-written. Since I don’t have a Windows machine, I couldn’t use the Davis software for data logging. However, several open source projects fill that gap for Linux. I tried WeeWx first and it worked so well that I didn’t bother trying anything else. WeeWx pulls data, generates web sites, and provides a control interface for the console.

I left the station on my patio table overnight to make sure the radio signal was going to work well. It looked good, so I began the process of putting it on a pole. I attached the mounting pole to a fence post. The mounting brackets in the pole kit (sold separately) probably would have held it just fine. In the interests of over-engineering, I added a small ledge to the fence post for the pole to sit on.

With one pole kit, the station ended up about 7 feet above ground level. This seemed too low for both science and resistance to errant toys. I added a second pole and that raised it up a few more feet. It’s still a sub-optimal siting, but it’s the least-bad option I have.

In an ideal world, I’d set up the station two meters above an open field. That’s not an option in my yard, so I did what I could. The station is in the sun much of the day (at least this time of year). It’s as far away from trees as I can get it. It’s probably fine for rainfall, but I anticipate the wind readings will be not great. The direction seems to be pretty noisy, no doubt because of nearby obstructions. And I suspect the speed will tend to read low for the same reason. 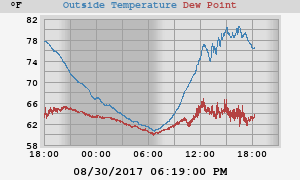 One thing I did notice was that the temperature and dew point data got very noisy. The lines had been relatively smooth until about noon on August 30th. After a few days of keeping an eye on it and comparing to the official observations from the Purdue airport, I had a satisfactory answer. It seems that the noise happens when the unit is in direct sunlight and there is little or no wind. The solar shield that houses the sensors does not have a fan, unlike higher-end models. So in still air with direct sunlight, it may develop hot spots. I could build my own aspirator, but I’m not sure I care that much.

After two months, the Vantage Vue seems like a pretty solid weather station. Of course, the weather has been pretty uneventful the last two months, so I still have some unanswered questions.

I have a couple of projects I want to undertake now, too. I’d like to get a couple of small displays so I can have the basic conditions displayed by the door. I also want to modify a WeeWx template so I can make a web page that I can share that doesn’t have my lat/long prominently displayed.