If you’ve been around here a while, you’ve seen me have opinions about the shapes of so-called “storm-based warnings”. Years ago, the National Weather Service changed the shape of tornado and severe thunderstorm warnings. Instead of issuing warnings based on the county, warnings are arbitrary polygons fitted to the threatened area. The idea is that by shaping warnings to the actual threat, the public gets a more accurate warning.

The reality is a little messier. Warnings are still frequently communicated to the public on a county basis. Worse, the warnings themselves are sometimes shaped to a county line. This is sometimes done to prevent a tiny sliver of a county to be included in a warning. Other times, it’s the result of a boundary between the responsibility areas of different NWS Forecast Offices.

Last week gave a great example close to home. The NWS office in Northern Indiana issued a tornado warning on the edge of their forecast area. Because the adjacent office didn’t issue a warning for that storm, the resulting shape was comically bad. 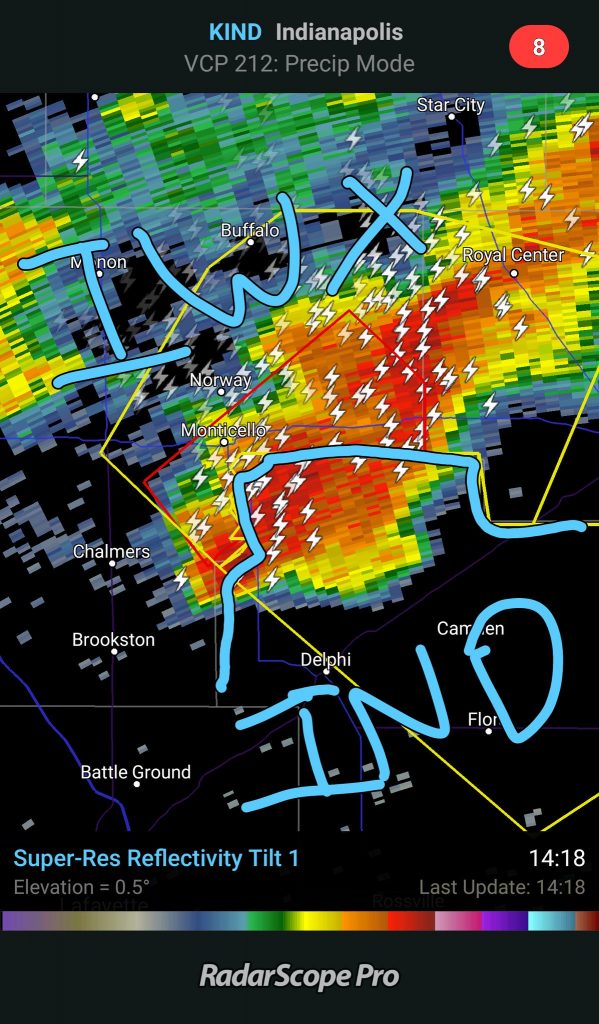 A tornado warning (red) shaped by the boundary (blue) between the IWX and IND forecast areas.

To be clear: I don’t blame the forecasters here. It was a judgment call to issue or not issue a warning. The real problem is that the artificial boundary does the public a disservice. Most of the general public probably does not know which NWS office serves them. Bureaucratic boundaries here only add confusion.

One solution is for the offices to coordinate when issuing warnings near the edge of their area. That doesn’t hold up well in the short time frame of severe weather, especially if an office is understaffed or over-weathered. Coordination takes time and minutes matter in these situations.

My solution is simpler: allow (and encourage) offices to extend warnings beyond their area. Pick a time frame (30 minutes seems reasonable) and allow the warning to extend as far into another office’s area as it needs to in order to contain the threat at that time. Once the threat is entirely into the new area, allow that office to update the warning as they see fit.

This allows offices to draw warnings based on the actual threat. It buys some time for additional coordination if needed, or at least gives a cleaner end to the warning. It does mean that some local officials will need to have a relationship with two NWS offices, but if they’re on the edge they should be doing that anyway.

The downside is that it increases the effort in verifying warnings because you can no longer assume which office issued the warning. And it could lead to some territorial issues between offices. But the status quo provides easier bureaucracy by putting the burden on the public. That’s not right.

Sidebar: what about issuing warnings at the national level?

Another solution would be for a national center to issue warnings. This is already the case for severe weather watches, after all. While it would solve the responsibility area problems, it would also reduce the overall quality of warnings. Local offices develop relationships with local officials, spotters, etc. These relationships help them evaluate incoming storm reports, tailor warnings to local conditions and events, etc. While a national-level warning operation would clearly provide some benefit, warning response is ultimately a very personal action that benefits from putting the warning issuance as close to the public as possible.