Few categories of book have the potential to be as obnoxious as the “how to be creative” genre. Scott Berkun’s The Dance of the Possible fails to live up to its potential in that regard. In fact, it’s not really obnoxious at all. Instead it’s filled with a humorous approach to treating creativity as a skill to be honed instead of a magical epiphany bestowed from some mysterious muse.

Berkun goes out of his way to avoid giving an easy solution to being creative, and he’s very dismissive of creativity as an end goal. The point of being creative is to create something, and creativity as a virtue is a relatively recent development. Explore the possibilities of choices in mundane situations, he suggests. Somehow, this ended up with me writing on my sock with a permanent marker at 12:30 AM. 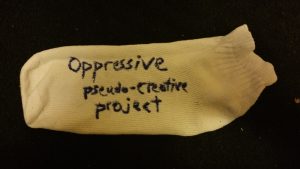 My oppressive pseudo-creative project. It will make sense if you read the book, I promise.

Any sort of creative work, even this very book review, is a delicate dance between two opposing forces: expanding what is possible for the project and contracting the scope so that it actually gets done. I can deconstruct the message of the chapters and reassemble them in any way I want, mixing them into something new. And I can shuffle these ideas around forever, but at some point the review must be published, or else what good has it done you?

One aspect of the book that I particularly liked was Berkun’s focus on some of the mental issues involved in trying to develop a creative work. In chapter 12, he talks about “the tightrope of creative confidence”: being confident enough to act, but not too confident. I prefer to think of it as “the eternal struggle between the Dunning-Krueger Effect and Impostor Syndrome”, but regardless of the name it’s a balancing act I know well.

All-in-all, The Dance of the Possible was a quick read. Indeed, the very first note I wrote down was “he seems to insist we not read the book.” This is not a book designed for Scott Berkun to wax poetic for chapters on end. Instead it shares real, actionable advice for exercising the thinking muscle. I enjoyed this book and found the framing of the problem and solution to be very helpful in understanding my own thought process. I can’t say that I came away with any sudden, brilliant insight, but maybe that’s the point.

The Dance of the Possible is published by Berkun Media. It goes on sale March 15, 2017. The author provided a review copy for this post.