The men’s basketball season ended for Purdue last night, with a close victory in Evanston against the Northwestern Wildcats. But in a sense, that game did not matter. No matter the outcome, Northwestern is likely to make the NCAA tournament for the first time in school history. More importantly (to me), Purdue had already secured the outright conference title. Purdue now has 23 Big Ten titles to its name, reclaiming sole possession of the lead after Indiana tied it up last year.

Speaking of Indiana, it was against the hated in-state rivals that the Boilermakers clinched a share of the title. To be able to secure a trophy at home, on senior night, against a bitter rival? That was a special treat for team and fans alike. When the final horn sounded, confetti burst from the ceiling and the trophy was presented to the team. 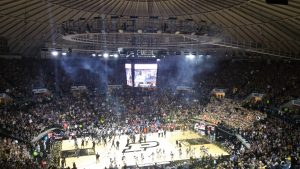 Confetti rains down after Purdue defeats Indiana and claims a share of the Big Ten title. February 28, 2017

The Purdue men’s basketball team celebrates with their trophy.

Earlier in the season, it seemed like Wisconsin had the title all but locked up. A few head-scratching losses by Purdue made the title seem out of reach. But Wisconsin was a paper tiger.

Despite holding the conference title record, it had been 21 years since the last time Purdue won the title outright (and seven years since the last title). Promising seasons in the early part of this decade were cut short by injury, or by underperformance, or by who knows what. A string of consecutive first-round wins in the NCAA tournament came to an end with heartbreaking losses in consecutive years. Purdue fans were hungry, so being able to celebrate a season that seemed destined for failure felt really good.

Up next, we hope, deep runs in the Big Ten tournament and the NCAA tournament.