ForecastWatch recently issued a report on the accuracy of weather forecasts from 2010 through June 2016 (PDF here). While many readers will focus on who was more accurate, what stood out to me was how forecast accuracy has improved. Meteorologists have long “enjoyed” a reputation for inaccuracy — often more due to perception than fact. But those in the know are aware that skill is increasing.

ForecastWatch’s U.S. analysis shows a clear — if small — improvement in the average accuracy since 2010. 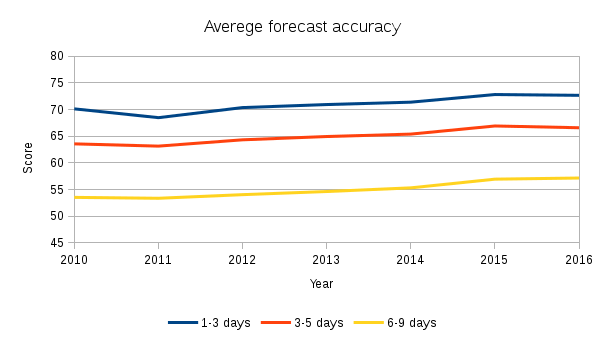 The chart above shows the average for all of the forecast sources Forecast Watch analyzed. To be frank, World Weather Online is a stinker, and brings the averages down by a considerable margin. Examining the best and worst forecast shows more interesting results. 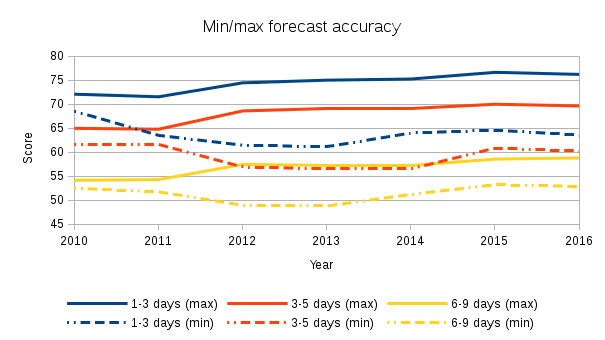 Forecasts get less skillful over time, thanks to subtle inaccuracies in the initial conditions (see also: butterfly effect). That’s obvious in both graphs. What this second chart shows is that the best 6-9 forecast is now roughly as skillful as the worst 3-5 forecast was in 2010. And the best 3-5 day forecast is in the middle of the 1-3 day forecast skill from just a few years ago.

Forecasts are definitely improving. This is due in part to better modeling — both more powerful computers and also the ability to ingest more data. Research and improved tooling helps as well.

Forecasts still bust, of course, and forecasters hate bad forecasts as much as the public does. As I write this, forecasters in North Carolina are dealing with an inaccurate snow forecast (winter weather forecasting sucks due to reasons I explained in a previous post). Missed forecasts can cost money and lives, so it’s good to see a trend of improvement.

Forecast accuracy in your city

The ForecastWatch report breaks down by broad regions: United States, Europe, and Asia/Pacific. But weather is variable on much smaller scales. The ForecastAdvisor tool compares forecasts at the local level giving you the ability to see who does the best for your city. As of early January 2017, AccuWeather had the most accurate forecasts for Lafayette, Indiana, but they only place fourth when considering the past year.