The decision to issue a tornado warning is a difficult one for meteorologists. A timely and accurate warning can save lives, but a false alarm contributes to an already-too-high indifference among the public.

On March 31, thunderstorms moved through Indiana in the mid-afternoon. The Storm Prediction Center had a slight risk for the area, so I had been keeping an eye on them. One cell had shown rotation since it had been in east-central Illinois. After a while, it started to fall apart. Then around 4:40 PM, I happened to glance back over at the radar, and I saw this: 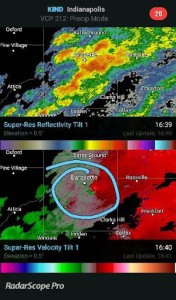 Oh yeah, there’s something going on there. I was talking to my friend Kevin and we were wondering why there was no warning. Even if the forecaster didn’t think a tornado warning was justified, a severe thunderstorm warning would have been a good hedge. As it turns out, the storm produced a brief EF1 tornado about a mile east of my house.

I don’t know why no warning was issued. But here’s a different take: should a warning have been issued? No one was injured and the damage that was done couldn’t have been prevented with a 10-15 minute lead time. Should this count as a false negative?

Yeah, probably. Although no one was injured, a small difference in the location could have easily changed that. But it makes me wonder if warning for every tornado is a reasonable goal.