I’ve written before that the National Weather Service is stuck in a paradigm where the general public isn’t assumed to directly consume most products. NWS text products are largely unchanged from decades ago when most public consumption was filtered through media outlets or emergency management officials. As a result, products are more focused on being technically correct instead of usefully correct.

A prime example is how the National Hurricane Center decided not to issue hurricane warnings as “Superstorm” Sandy made landfall. While technically correct, the decision led to confusion and caused some to minimize the threat.

I suggested on Twitter that people really only want to know three things:

To the extent that the specific threat matters, it only matters as it affects the answers to those three questions. If your roof disappears because of a wind gust instead of a tornado, is it any less gone? Of course, the distinction matters for scientific research purposes, but does the general public care?

When I saw an infographic that Ashley Atney put together, it hit me: the NWS simply has too many warning products. Maps like this drive the point home: 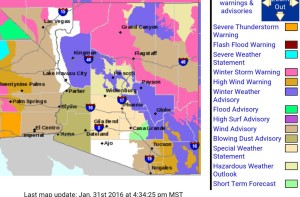 This may be heresy, but what if we condensed products? Winter storm, lake effect snow, and blizzard products could all be combined into one, with the product itself describing the details. After all, merely saying “winter storm” versus “blizzard” doesn’t really communicate much anyway. Further heresy would be to combine severe thunderstorm and tornado warnings.

I’m not saying that these (and other condensations) are necessarily the right way to go. There’s a lot of research that would need to be done first in order to make sure that the net effect on the public is positive. But the current system is in need of improvement.

2 thoughts on “Too many NWS products?”