Last week, I spent a few days in Austin, Texas for the Supercomputing conference. Despite having worked in HPC for years, I’ve never been to SC. It’s a big conference. Since everyone heard I was going, they set a record this year with over 12,000 attendees. That’s roughly 10x the size of LISA, where I had been a few days ago.

I missed Alan Alda’s keynote, so my trip was basically ruined. That’s not true, actually. I spent most of the time in my company’s booth giving demos and talking to people. I had a lot of fun doing that. I’m sure the technical sessions were swell, but that’s okay. I look forward to going again next year, hopefully for the whole week and not immediately following another week-long conference. 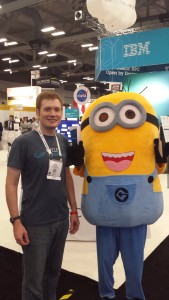 Ben with a minion